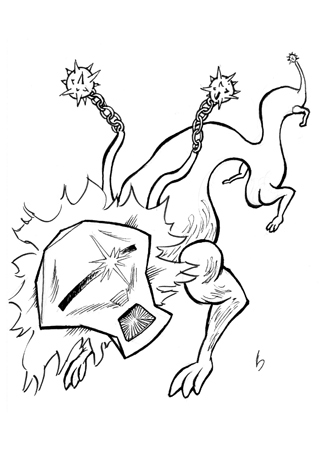 Designed to be a bodyguard for the leader of the Planet Shapers mission, LE-09 has suffered damage to it's negatronic brain in the warp-jump to this world, and has gone wandering off beyond it's normal operational parameters. This might be the world's first clue that something is not right, leading them to the Planet Shapers.

The creature has a literal photographic memory, normally used in exploring a world in preparation for it's being terraformed. It is primarily powered by solar energy, and without access to it's usual off-world power back-ups, LE-09 becomes listless or immobile between midnight and dawn, taking approximately two hours of sunlight before it regains full operational function. It gets secondary power from the ethereal dimension, though this energy maintains it's memory banks and other programming, and is insufficient to allow LE-09 to move about.

Mimicking it's masters, it will attempt to eat people, roaming in search of humans to prey upon, even though it does not need to eat substances from this world for sustenance.

It can activate additional armor by "using" an Action Die (no roll required, it just uses up one Die on that round). However, this system is also faulty, only kicking in (after the Action Die has been "spent") on a 1-in-5. The armor will remain up for no more than 2d5 rounds, requiring another Action Die if the creature decides to again activate the armor.

Consider LE-09 as having a Stamina of 21 for any purposes where that would be relevant.